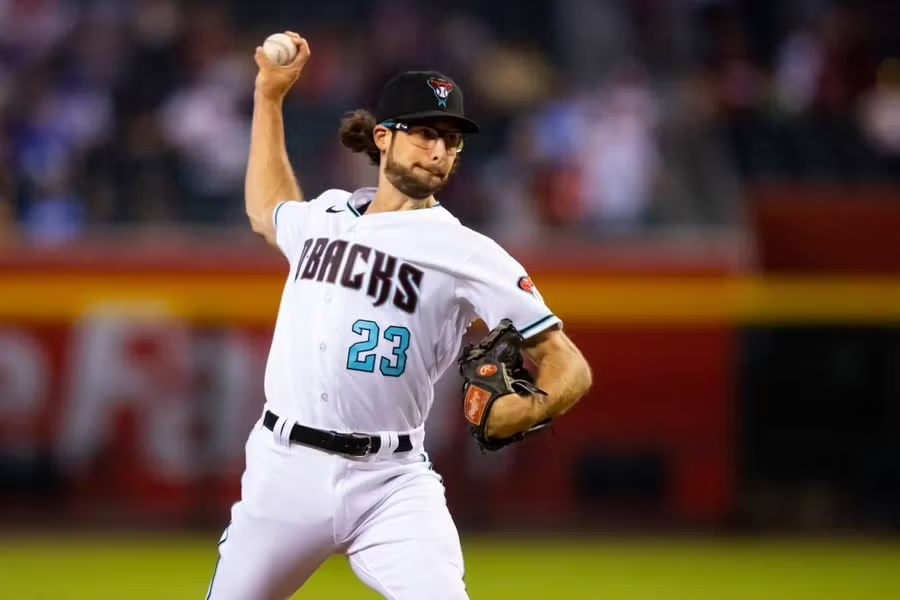 Zac Gallen stretched his scoreless streak to 34 1/3 innings and Jake McCarthy homered, tripled and drove in a career-high five runs as the Arizona Diamondbacks mauled the Philadelphia Phillies 12-3 on Tuesday night in Phoenix.

Gallen (10-2) gave up just two hits in seven innings, striking out seven and walking one as the Diamondbacks won their season-best fifth straight game. The scoreless streak is the second longest in Arizona history behind Brandon Webb's 42-inning stretch in 2007.

McCarthy had a two-run triple and three-run homer and Corbin Carroll had three RBIs as the Diamondbacks beat the Phillies at home for the seventh consecutive time. Arizona's Alek Thomas had a career-high four hits, and Daulton Varsho and Christian Walker had three apiece.

Philadelphia's Aaron Nola (9-11) allowed a career-worst eight earned runs and equaled a career worst of 10 hits while striking out five and walking none in four innings.

Aaron Judge hit his 51st home run of the season to extend his major league lead and help New York to a win against Los Angeles in Anaheim, Calif.

Andrew Benintendi and Anthony Rizzo also homered for the Yankees, who ended a three-game losing streak. New York starting pitcher Jameson Taillon was hit by a comebacker and the right-hander left after the second inning because of a right forearm contusion. Greg Weissert (1-0) retired all six batters he faced to earn his first major league win in his third appearance.

Max Stassi and Mike Ford homered and Shohei Ohtani had two hits for the Angels, who came in on a four-game winning streak.

Atlanta starter Max Fried (12-5) did not have his best stuff and left after five innings, his shortest stint since July 11. He allowed three runs (two earned) on seven hits, one walk and recorded a season-low three strikeouts.

Vladimir Guerrero Jr. added a solo homer and an RBI single for the Blue Jays, who have won the first two games of the three-game series. Kevin Gausman (10-9) allowed two runs, five hits and one walk while striking out nine in six innings.

Tampa Bay's Yandy Diaz went 2-for-3 with two doubles. Randy Arozarena also had a big night, going 3-for-5 with a homer and two runs. Rays lefty Shane McClanahan, whose 2.20 ERA ranks second in the American League, was scratched from his scheduled start due to a shoulder impingement. McClanahan was replaced by Shawn Armstrong, who pitched three scoreless innings.

Josh Naylor homered, Steven Kwan doubled in two runs and four pitchers combined on a one-hitter as Cleveland opened a three-game series against visiting Baltimore with a victory.

Cal Quantrill (11-5) won his seventh straight decision, allowing one run on one hit over six innings. He struck out four with three walks. The lone hit was a leadoff single in the second inning to Ramon Urias, who scored on Ryan Mountcastle's sacrifice fly.

Trevor Stephan, James Karinchak and Emmanuel Clase did not allow a hit over the final three scoreless innings for Cleveland. The Guardians' bullpen has not allowed an earned run over its last 30 1/3 innings dating back to August 15.

Derek Law (1-0), making his Reds debut after being promoted from Triple-A Louisville earlier in the day, earned the win with two scoreless relief innings. The top three batters in the Cincinnati lineup combined for six hits and three runs.

France went deep for the 16th time this season and for the second time in as many games. Cal Raleigh homered and added a sacrifice fly during a six-run, third-inning eruption.